Beyond Belief Network teams reported more than 20 service events and over 700 volunteering hours in August! Here's how some of our BBN teams put their humanism to work. Humanist Alliance Philippines, International (HAPI)
HAPI Cebu Chapter joined the launch of the third Ready-to-Learn project series last August 1, 2016, at Busay Elementary School in Cebu City. A total of 382 pupils benefited from the project after receiving kits containing school supplies and snacks. Following the distribution of the supplies to the children, some classroom and teaching supplies were turned over to the teachers in the hopes of maximizing student learning. HAPI also launched its literacy program aimed at providing quality supplemental education to children from impoverished areas. Registration and the first day of classes were organized on August 7th. 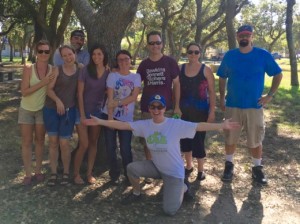 Humanist Community of Central Ohio and Central Ohio United Non-Theists
HCCO and COUNT were chosen as BBN teams of the month for August in recognition of their strong collaboration in support of locals in need. The two groups are members of the Columbus Coalition of Reason. Between the two of them, the groups have sent 60 volunteers who have worked nearly 450 hours at 20 different events at the Community Shelter Board, which provides housing and meals to homeless families and individuals. This month's joint event was the ninth collaboration between the two groups. Austin Humanists at Work
Austin Humanists at Work carried on their two regular events for Austin residents in need. First, the Gettin' Knotty group got together on August 18th to knit and crochet cotton washcloths. Those washcloths were among the items distributed at the August giveaway on the 21st, where 30 volunteers handed out food, school supplies, and personal care items to more than 160 people! We selected their photo from the giveaway as the August Picture of the Month! South Texas Atheists for Reason (STAR)
It was another busy month for South Texas Atheists for Reason, starting with Hug an Atheist on August 3rd, when members worked with the University of Texas at San Antonio SSA to be present in the community and hand out information (and hugs). Among many positive interactions, group members had a good conversation with some Muslim women who stopped to ask questions. STAR volunteered at the San Antonio Food Bank Garden August 6th and August 13th. Tasks included removing trash, weeds, and debris and planting seeds. STAR continued its collaboration with MAAF to provide a weekly Socratic-style meeting and humanist chaplaincy support for the trainees of different (non-Abrahamic) or no faith at Lackland Air Force Base, and assisted more than 100 individuals with hygiene supplies at its monthly Helping the Homeless event. Springfield Skeptics
Springfield Skeptics helped with landscaping and got a free tour at the Missouri Institute of Natural Science! The museum houses all kinds of fossils and is tied to the prehistoric Riverbluff Cave in the Ozarks.